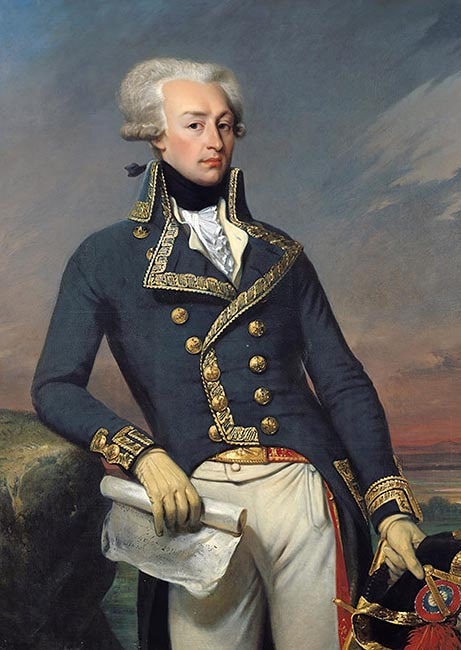 On December 7th, 1776, Silas Deane – Continental Congress envoy to France – made an agreement with Lafayette and Johann de Kalb to serve the American cause with their military expertise. Unfortunately, Arthur Lee and Benjamin Franklin replaced Deane and were not in favor of the French men’s previous agreement.

Fearing that this agreement might infuriate the British, King Louis XVI ordered to prohibit Lafayette from departing. Seizing of Lafayette’s ship was demanded by the British ambassador in the French court at Versailles, and Lafayette was arrested. However, Lafayette escaped while eluding a couple of British ships missioned to recapture him and set sail for South Carolina.

After reaching South Carolina, he journeyed towards Philadelphia. Congress was reluctant to assign him the responsibilities because he was very young. However, when Lafayette showed his willingness without any pay, Congress showed respect to the young man, and Lafayette got commissioned on July 31st, 1777, as a major-general.

In 1777, Lafayette was serving at Brandywine, and in 1778 he served at Rhode Island, Monmouth, and Barren Hill. When Britain declared war, Lafayette was asked to return to France and serve the king because he had a treaty signed to serve France in times of need. Washington did not stop Lafayette from leaving, and he departed for France in the first month of 1779. Two months later, Franklin sent his report from Paris that Lafayette is an exceptional advocate at the French court while defending and supporting the American cause.

In 1781, Lafayette came to America to help the Americans in their war in Virginia. He assisted in the siege of Yorktown, and after succeeding, he made his return journey to France and continued serving his country.